Hello,  It has been a little while since I put together a blog post and not just a La Verdadera Destreza resource list or Spanish circle update.  I am sorry about that, but I hope to get back to posting about things that might prove valuable for those studying La Verdadera Destreza (LVD), as well as folks interested in researching the martial Arts and Sciences (A&S).

Even though I haven’t posted in a bit, I have been anything but bored.  The Pennsic War happened over the summer where I taught a Destreza footwork class and hosted a martial A&S panel, I have been involved in multiple fencing tournaments, and in early July I was very honored to be inducted into 2 different orders within the Society for Creative Anachronism (SCA).  Those are the Order of the Golden Rapier (OGR) which is given for excellence in fencing, and the Order of the Maunche which is given for excellence in the arts and sciences (specifically my Destreza research).  I am humbled beyond words to be inducted into these orders, which contain some insanely talented and amazing people that I admire.

Now to get to the heart of what inspired today’s post.  As you can guess by the title I was very lucky to attend a Destreza seminar this past Sat. and Sun with Ton Puey, who is the head of the Academia da Espada in Spain.  The seminar was held at The Athena School of Arms, which is a Boston area HEMA school.  They are a great group and I know some of their members as they have hosted visiting instructors in the past, such as a seminar I attended with Devon Boorman in June.

If you do not know Ton Puey you can find out more about him from the resource list (see link in first paragraph or at top of page).  I would say there are a handful of modern masters that are very actively teaching and researching the art of LVD.  Some of them include Ramon and Jeanette Martinez, Sebastien Romagnan, Alberto Bomprezzi, Tim Rivera, and Puck Curtis.  Near the very top of this list is Ton Puey.  He is the head of his fencing school in Spain and recognized for his skill in Destreza as well as his scholarship, as he has also co-authored / translated multiple books and papers on the topic.

Sadly, there is no way for me to summarize everything that happened in 2 days /12-14 hours of seminar and lessons in a short post.  I have attended and taught a number of martial arts seminars over the years.  Even with taking notes (which I always try to do) I tell people that you are lucky if you can absorb between 1-5 concepts (varies with length of seminar) to work on at home. I will give you an idea of what was covered and some of my personal take home messages.

Saturday morning was Destreza basics.  We did not pick up a sword at all that morning and worked entirely on footwork and sensitivity.  OMG it was AWESOME, lol.   I picked up at least 2 new footwork drills along with an expansion of several that I had been doing.  I am a firm believer that footwork is the heart of all martial arts.  While the paint and molding in a house might look nice, it will do you no good if the whole thing is built on a poor foundation.  I think this is doubly so in LVD since we are constantly moving on angles and curves, crossing our steps, etc.

The other part of the morning was spent practicing a drill I would describe as being similar to Tai Chi sticky hands or Wing Chun’s Chi Sau.  If you don’t know what these are I suggest googling it.  The idea behind this was to help us understand what is called “tacto” in LVD.  It is this style's method of contact and blade control.  We also combined the footwork drills with this concept and it was very much LVD training gold for me.

If you watch any videos of Ton you will notice his use of distance, rhythm, tacto, and footwork are very distinctive.  These drills helped me better understand how he is moving and not only confirmed I am on the right path with my self-training, but they also gave me a type of mental permission to expand on what I am doing.

On Saturday afternoon I had a private lesson where Ton covered the Atajo with me in relation to my own body.  A couple of my friends also took privates and we were very lucky to be able to watch each others’ sessions.  I can only say that if you ever get a chance to train with any modern master I suggest you TAKE IT!  Training on your own only goes so far and the type of advice and feedback you get in terms of refining your movements is priceless.  You can of course train on your own, but without a doubt it will take you longer to find your way along the path, than if you have a professional guide who has been there before.

Sunday morning’s seminar was intermediate Destreza and this was where Ton covered the basics of blade control.  He went over Atajo and cutting with the group and he had us practicing the application of that along with our footwork from the day before.  We also briefly went over the 4 LVD General Techniques (a link to a blog post I wrote on them a while back) and how they can be incorporated, but to be honest I might be combining some of my memories from the private lessons I watched the day before.  In the afternoon he taught a buckler class which was great as well.  He drew connections to both the larger Rotella (a link to a shield I personally own) as well as how to use these same concepts with a dagger.

As I said, in any seminar you should try and absorb as much as you can, but there are limits to what is possible.  A few of my personal take home lessons from the weekend include:


Finally, one of the greatest things I got out of the conversations and time I spent with Ton was that I think I am on the right track with my studies and applications of LVD.  I have a long way to go on this journey, but it is great to speak to a guide that can help me along the path.

I am hoping this is the start of a trend for me posting more frequently.  Some future post topics I hope to cover include: 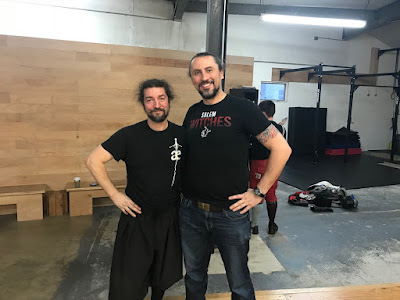