I am so happy to get around to this post which has been brewing in my head for almost 2 months.  This is going to be a summary of an article that is linked on my resource page that has been so insanely useful to me in putting historical concepts and counters into practice.  This is not a review, but a summary.  My review would be a lot less eloquent and probably be filled with too many useless gushing comments to be helpful to anyone. Hell, his footnotes are just amazing in their own right and lead me down a couple of research roads.  Instead I will summarize most of the Masters covered and let you know what I have put into play so far.

The article is titled:
Que llaman estar nerbado: the Spanish response to the Italian fencing tradition, 1665 - 1714  by Charles Blair  and is located here: Acta Periodica Duellatorum

I am sometimes frustrated with the Spanish authors and how they lack diagrams and pictures that would allow me to visualize their movements.  Also, how I have to wade through so much flowery language and philosophy to get to the heart of what they want me to do.  This article though is what I love about the La Verdadera Destreza (LVD) masters and what I think the Italians do not have access to.  The LVD masters actually spend time telling you not just how to fight in their style, but also how to adapt it to fight an opponent doing something completely different than you are.

If you are practicing Destreza you should READ this article.  I also will reluctantly say that if you are practicing Italian and want to understand what I am potentially going to do against you, READ it.  As my friend Lupold taught me, if the other fencer gets better, it will force me to learn more and improve myself as well.  This article seriously changed my game and pointed me toward some other period masters with some great ideas that I am now investigating farther by researching and reading their manuals.  I credit many of these strategies and concepts with helping me place 4th out of about 70 fighters at the SCA Birka tournament.

Blair organizes the article chronologically and starts off in a slightly later period around 1672 and 1675. It is mentioned how Pacheco's last book contained some material on how to fight the Italian style, but it was written in 1635 and not published until 1672, which was long after his death ca 1640.  During that time the world of fencing had continued to evolve and the practitioners of the art had to rethink his words and figure out their own way of dealing with the competition.  Many of the LVD masters actually contradict each other in terms of their recommendations.   This could be seen as a negative, but instead I think of it as a great thing that simply gives me more options and concepts to potentially apply.

These are the VERY boiled down concepts that I took from the article (along with the works I have further investigated) and what I experienced while implementing them.


My take away:  I have now ingrained and trained the need to circle to my right.  God, it was painful and uncomfortable to do, but I now love doing this and it is very effective against the Italian opponents.  I had been trying the straight arm down style, but not to great success. It is a good resting point and I use it occasionally, but more as a transition point. Lastly, staying profiled should be a norm and a basic, so it was good to have this reinforced


My take away:  The dagger information wasn't really a big surprise and is how I usually hold my dagger, but it does go to soundly disprove any of the modern writers of fencing that say true Destreza only uses single sword.  The biggest thing that helped me from his take was how to lower my sword.  This is now regularly my go to stance against Italian as it still gives me the geometric advantage while allowing for more cover.


My take away:  I am very mixed on this one.  Initially I really like the concepts here, then I found and read a partial translation of the original here: The Association for Renaissance Martial Arts (ARMA)  and was very underwhelmed by the work.  It feels like a sad imitation of the other masters when reading it and was far too general. I will say that Blair seemed to pull more from it than I did and his interpretation was awesome.  Also I learned that apparently de la Vega and Rada were from the same section of Spain (Cantabria)  The reason why this is important is because both author's show very similar techniques in how they hold their swords (hilt up, point down) and also in how they are the only 2 LVD masters to speak about a third medio.  Also, while de la Vega precedes Rada by almost a generation Rada goes into how he invented his posture and stance, when what he describes is precisely the stance that de la Vega illustrates in his manual (see picture from manual I found with LVD on left).  In the end I am just starting to get more familiar with this method of holding the sword and I am using it as an option.

(Plate from orignal de la Vega manual.  LVD person on left also just happens to look a lot like my fellow fencer and friend Remy if he had long hair, even if he is an Italian fencer and probably belongs on the right) 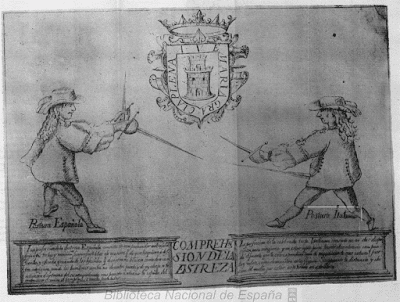 
My take away:  This is a very small section, but the idea to have a restless sword has been so insanely priceless.  I was far too stagnant before reading this small passage and it has changed how I use Destreza.


My take away:  I am just starting to experiment with Rada's sword guard.  Honestly I will probably come back to this again and get more from it as I start working through Romagnan's book which goes much more in depth into Rada's style.


My take away:  Again another section I think I will have to reread to absorb more of.  The biggest change for me from this section came with the concept of needing to work in second intention.  I knew I had to bull fight more and show patience, but it really didn't soak in until after I read this section funny enough.


Blair also touches on very briefly Nicolas Tamariz who he says little of other than his work is based off of Rada and a Neopolitan duke named Giuseppe d'Alessandro who has a few things to say about how the Spanish fight, but nothing I need to cover here.

He finishes off the paper with a great section on Ethical Considerations of period and how it relates to Spanish fencing.  Again nothing on how to counter, but just rich with awesome ideas and societal context.


To summarize the main take homes that changed my Italian counter game the most from these masters:


I am constantly adapting my game and integrating more as I experiment with and learn more period concepts.  There is a reason this style of fighting stayed around and people were writing about it from 1582 until well into the early to mid 1800's and that is it worked.

Thanks for reading.
Posted by Doug Kozlowski at 9:38 AM 5 comments: