Hello,
I am sorry it has been so long since I have made an update here, but I am very happy to say that my passion for LVD has not been diminished during these strange pandemic times that we have all been living through.

Before I get into my current research I want to share something that I think everyone interested in Destreza should be aware of.  For the past 5 weeks the Sacramento Sword School, lead by Puck Curtis and Eric Myers, have been hosting some amazing online lectures with experts in the study and practice of Destreza.  So far they have had Tim Rivera, Lois Spangler, Manuel Valle Ortiz, Matthew Howden, and Sean Reichman give presentations and next Thurs. they will be hosting Alberto Bomprezzi.

Probably the easiest way to get connected with the invitation to the lectures is to join one of the many Destreza groups on Facebook, as Puck typically cross posts there each week.  From there you can follow the instructions on where to send an email to get an invitation.  After each lecture he also posts the video to let people who missed it go back and watch them.  You can join any of the groups, but for simplicity I will give the link to the "Destreza in the SCA" FB group as I think that is a great one to join in general: Destreza in the SCA

So recently I have been starting to research and delve into a portion of a Pacheco translation in which he discusses how a diestro should fight someone who is wielding a curved blade he refers to as an "Alfanje".  The material I am working from was translated by Xose Nieto, has notes and explanations by Ton Puey, and was Revised by Rob Runacres.  A direct link to that wonderful material can be found by clicking:  Against the Alfanje.

My initial research and the short presentation I gave was for a Society for Creative Anachronism (SCA) challenge.  I will be posting my slides and script below, but if you are interested in just watching the approx. 6 minute youtube video you can just click to where it is hosted on the SCA East Kingdom youtube page:  "LVD Against the Alfanje presentation by Douglas Kozlowski aka Don Doroga Voronin"

As a bonus (or if you want to just skip to the end)  at the bottom I will be talking about some additional related information about Carranza that I learned from Dr. Manuel Valle Ortiz.  This knowledge is something I will be using as I move forward.  Again this initial research is hopefully only the start of a larger research project. Enjoy! 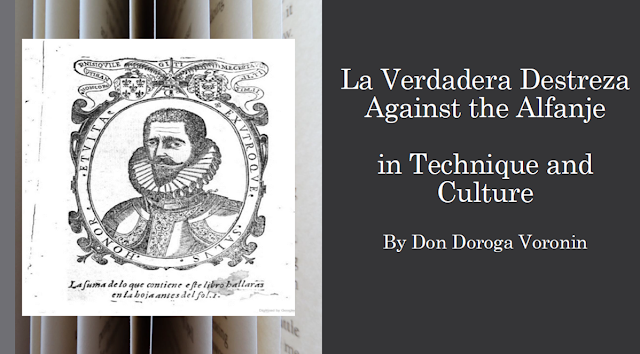 I am discussing how one of the authors of this style of Spanish fencing called La Verdadera Destreza, Destreza, or as I will refer to it LVD wrote about how to fight a certain style of weapon
My goals are: 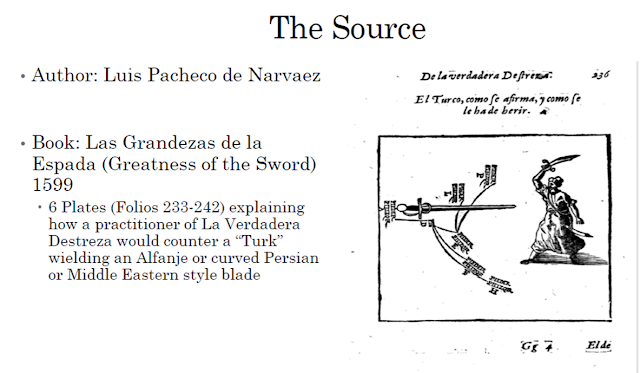 The author is Luis Pacheco de Narvaez.  Pacheco is one of the most prolific authors on LVD.
This book I am referencing was written in 1599 and is only the second (known) book that was ever written on LVD, after the one by the founder Jeronimo Carranza in 1569 which was published widely in 1582.
I am only looking at a small portion of this work, 9 pages or 6 plates where Pacheco discusses how to fight someone with a curved blade that he calls the Alfanje. This is a Mediterranean sabre.
Based on the picture he provides and how other authors describe it, it was most probably what we call a falchion.
The person he describes as wielding the weapon is referred to as a Turk or a Moor and he uses these terms interchangeably, and there is a lot of baggage with him doing this and I will bring that up shortly. 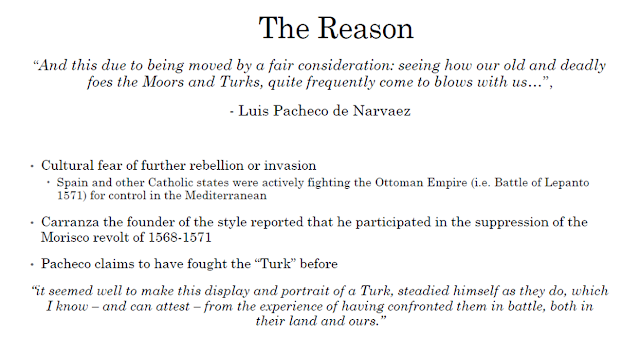 The reasons behind him writing about this techniques has layers:
1st - There seems to be a fear in Christian Spain of either reinvasion by Muslims or rebellion by those that are still living there.   Spain as we know it today had taken back the Iberian Peninsula in 1492 after several hundred years of fighting against primarily Muslim and this is only about 100 years before this book was written.
2nd- As late at 1571 Spain was still fighting the Ottoman empire for control over the Mediterranean.
3rd- The founder of the style, Carranza, actually participated in the suppression of a Morisco revolt (*SEE UPDATE AT BOTTOM) The Moriscos were actually Muslims that were converted to Christianity, which goes back to the fear.
and
4th - Pacheco actually claims to have fought the “Turk” before and has personal experience against this opponent. 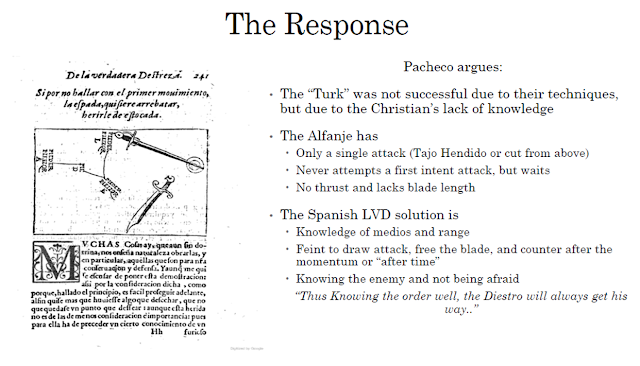 Pacheco claims that the opponent is successful in wielding this weapon, “due to inconsideration and little wit of our men, than for what they are capable.”
He is saying the opponent wasn’t successful due to skill or technique but because of the Christian lack of knowledge AND of course Pacheco is taking it on himself to educate people with his book.
He goes on to say that while the weapon might seem scary, the limitations are many….
HE CLAIMS:
They have only a single downward attack,
They never attempt a first intent attack and only wait, and
They have no thrust and lack blade length compared to the Spanish sword, being about ¼  shorter than the Spanish blade.

I am going to over simplify and generalize here, but I think that is only fair as it is exactly what Pacheco did.  Almost every one of his 6 responses can be broken down into:
Stay far enough away (know your range), Feint, free the blade (disengage) and counter after time or after the attack
He goes into some items like how to close on angles in various directions, what happens if the opponent comes back up real fast, but the response still follows those same steps. 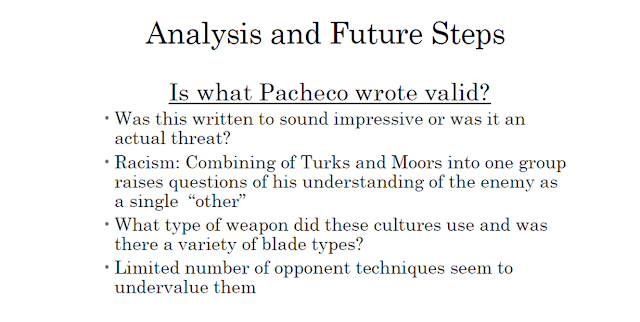 The big question I want to investigate is…
Is what he wrote actually valid?

Sound Impressive: First…. Was this written to sound impressive or was it an actual threat?
Some evidence points that he might have just been writing it to gain social prestige in the royal courts rather than it being practical, some of the writings of Pacheco’s social enemies at the time (Quevedo) accuse him of doing just that.

Racism: He uses the terms Moor and Turk to mean the same thing and they are not the same culturally, but he groups them together as a single “other”.  Moors were muslim inhabitants of the Iberian Peninsula and were from a certain area, originally Morocco.  Turks were supposedly from the Ottoman empire, this generalization raises questions about his understanding of the enemy

Weapon: What type of weapon did the opponent actually use, it looks like a falchion, but other Mediterranean and middle eastern weapons had curved blades, like the shamshir, and they also might have been used in period and again he grouping them together

Technique: His opponent only has one downward swinging strike, I want to look into the cultural fighting styles that used the curved blade in this period, to see if it was true, as it really undervalues the enemy and goes back to him possibly trying to sound impressive rather than having true content 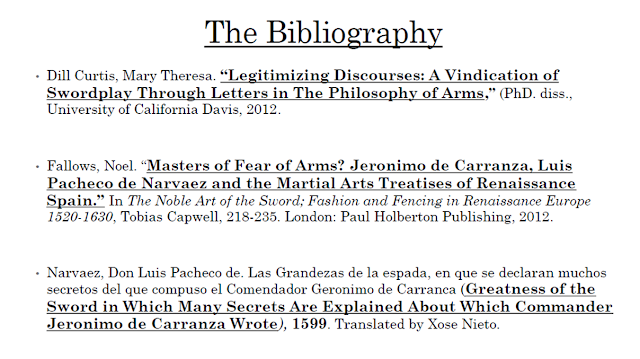 In Summary, I am super excited by this material, with such a small passage there is so much to look into in terms of technique as well as the cultural exploration of the history of Spain, their opponents, the politics, the weapons they used, the time period and the lives of the people that lived there.


SO... there you go. That is the material that I presented for the challenge.... BUT WAIT THERE'S MORE :-)

After I put this up on facebook I was beyond lucky and honored to be contacted by Dr. Manuel Valle Ortiz with additional information that possibly disproves one of my sources that said Carranza had participated in the Morisco revolts.

Dr. Valle Ortiz told me he was not sure if Carranza was in the Alpujarras revolt. While Carranza did mention it in his book, there is possible conflicting information in records that puts him in a different location during the rebellion.  Something just as interesting was that in Carranza's book there is a character that is a mockery of a false Destreza master who actually speaks in the first person of how he was in the revolt.

What does this mean?  I am not quite sure, but I do know that it opens up some very interesting places for me to take my future research and writing on this subject.

That is about it for now, so until next time I hope you all stay happy and safe. :-)


Posted by Doug Kozlowski at 8:20 AM No comments: